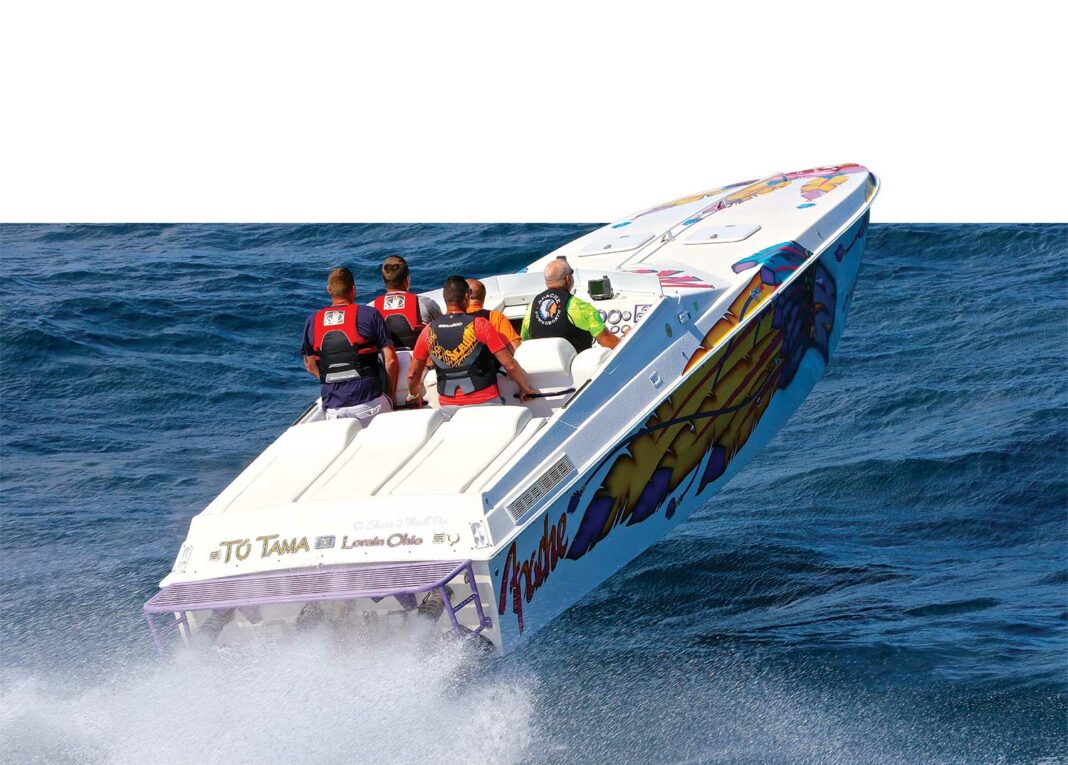 It’s hard to visit the small town of Boyne City, Michigan, and not conjure up words like “quaint” and “charming.” A town of around 3,700 residents on the shore of Lake Charlevoix, it’s what you imagine when you think of a peaceful place to live or visit. But every year, the weekend after the Fourth of July, this little town opens up to over 120 high-performance boats from around the country and Canada for the annual Boyne Thunder Poker Run charity event that brings all the energy, buzz, and, yes, noise of a big city.
“You can’t quite describe the awe and genuine excitement you feel when these magnificent boats roar by,” said Ingrid Day, Boyne Thunder event coordinator. “For a few days, we not only get to show off these powerhouse boats, but also get to show off our city.”
Boyne Thunder is a 150-mile treasure hunt of sorts, with large power boats roaring through the waters of Lake Charlevoix and Lake Michigan, making five stops to pick up cards for a poker hand. With each stop—in Elk Rapids, Northport, Charlevoix, Bay Harbor, and Harbor Springs— participants get closer to the opportunity to get the winning hand, with the added benefit of delighting boat enthusiasts, residents, and vacationers in those cities. While the competition is fairly tame and offers prizes for first, second, third, and—generously—last place, it’s the boats themselves that bring all the excitement.

The boats range in size from 22 to 55 feet in length and feature horsepower ranging from 425–3,600. If you’re not a boat geek—that means some of these boats are capable of speeding up to 150 mph.

What started about 20 years ago as a fundraising event for a charity has developed into an effort to revitalize the downtown area. The event has grown to more than 120 boats with full crews from California to Florida to Canada, bringing thousands of people to Boyne City each summer for the two-day event. Friday night hosts a welcoming of the boats to town with strolls along the marina to get early peeks at this year’s participants—and the popular Stroll the Streets, which brings 10,000–15,000 people to the downtown area for dining, shopping, entertainment, and the car show. Saturday can include a stop at the farmer’s market before the boats power up and roar out from Lake Charlevoix into Lake Michigan, and then parade through the five town stops along the way. People line the harbor and bridges to get a good look and, with good reason, gawk.

“There’s really nothing like it,” said Day. “People lined up along the end of the lake, on the bridge—smiles just everywhere.”

While one crew will triumph in the Poker Run, the real winners are the two charities at the heart of the event, Camp Quality and Challenge Mountain, and the sponsoring organization, Boyne City Main Street. Camp Quality provides experiences and year-round support for children with cancer and their families. Many people in the community have volunteered and worked at the very first camps held by Camp Quality. Challenge Mountain provides experiences for individuals with mental and physical challenges through outdoor recreation like skiing, which is such a huge part of Northern Michigan life. There are Boyne City residents who work at the local resale shop that also raises money for the nonprofit. And finally, Boyne City Main Street, which seeks to make the downtown a more vibrant place while preserving its historic character.

“The nonprofits that Boyne Thunder supports are as big a part of the event as the boats themselves,” said Day. “They are part of our community and are part of who we are.”

It’s clear that the only thing bigger on the water than the boats each summer in Boyne City are the hearts of the people who live there.