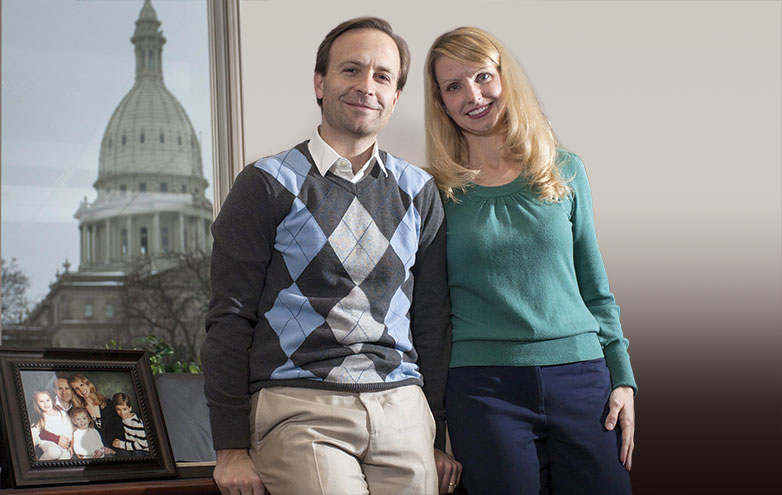 Down a country road in Ionia County, not too far from where she grew up on a sesquicentennial farm, Julie Calley lives a fairly normal life. Julie is a wife, mother of three and devoted public servant. Of course, she’s also married to the lieutenant governor of Michigan, Brian Calley, but her career takes her to Lansing as the representative for the 87th District in the state’s House of Representatives.

The pair are a rare commodity in Lansing, with Brian serving his final two years as the lieutenant governor of Michigan while Julie began a two-year term in January. She now holds the seat that her great-grandfather Herbert Powell, grandfather Stanley Powell and her husband have all held. Both Calleys also have served as Ionia County commissioners.

One wouldn’t think of small-town Portland as a hub of Michigan politics, but for Representative Julie Calley, it’s sort of the family business.

“My family has a legacy of public service,” said Calley. “My mother has served at the township level for almost as long as I’ve been alive. She just retired last year as a township trustee. My grandfather and great-grandfather both served in the state legislature, so public service is definitely in my blood.”

Julie notes that one doesn’t need to have a long heritage of politics in the family in order to serve. “There are usually a number of local boards which need more interest and participation. There are numerous empty roles on the county level that sometimes have only one candidate or sometimes not even one. There is a definite need for public servants.”

It may have been that desire to serve that drew Julie and Brian together. High school sweethearts, the Calleys married as she was finishing a degree at Northwood University and Brian at Michigan State University.

After college, the Calleys moved back to Ionia County. Julie had worked in commercial real estate while her husband made his mark in the state political scene, but Julie always stayed involved in local politics. Calley was chairwoman of the Ionia County Board of Commissioners and chairperson of the Michigan Community Service Commission. She also served two terms on the Republican State Committee. Now, as Julie is still in the early part of her two-year term in the Michigan House of Representatives, she is taking her local experience to the state level.

“It boils down to making government work better for the average citizen. Politics can overcomplicate things. It has to center back on the community we’re serving—a person-centered approach.”

Julie’s experience living in a rural setting has actually driven her work approach. While she notes that the jump from roughly 9,000 constituents to approximately 90,000 constituents is daunting, she is utilizing the same relationship-building skills she used on the local level in her new role. Her experience in small-town Michigan is an inspiration as she moves forward, building relationships in the state’s House of Representatives.

“Those who choose to live in the country tend to have a certain independence and yet reliance on one another,” Julie concluded. “So when a problem arises, it’s typical for neighbors to band together and take care of one another. Identifying a need and taking care of it—I wish we could see more of that.”