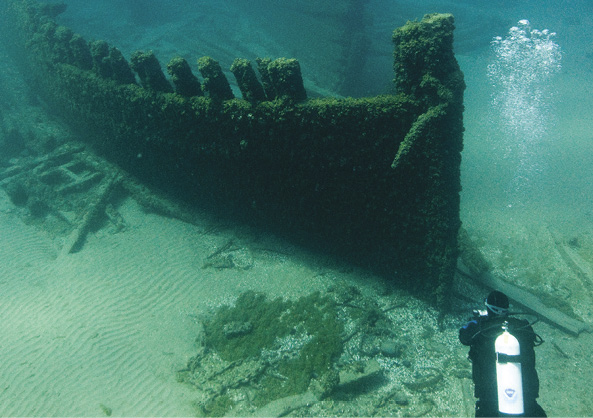 The eerie romance of a shipwreck is something that seems saved for epic adventure novels or blockbuster Hollywood movies. But just off the coast of Lake Huron, near unassuming Alpena, MI—is one of the most treacherous stretches of water in the Great Lakes—a place called Thunder Bay.

There lies the remains of over 200 ships, only about 100 that have been physically discovered. While it’s difficult to imagine the friendly beaches of the Great Lakes as anything but welcoming, these deep and traitorous waters were once bustling byways for both recreational and business mariners, not all that ended at their intended destination.

“It’s easy to stay motivated and excited in your work when you’re dealing with such a robust historical landscape,” said Stephanie Gandulla, maritime archeologist and media coordinator for Thunder Bay National Marine Sanctuary. “There are so many stories lying just below the surface of the Great Lakes.”

Those stories just increased substantially as the marine sanctuary has grown from 448 square miles to a remarkable 4,300 miles as of last September. This means expanding both research and educational programs as well as a multi-year plan to “characterize” every known shipwreck in the sanctuary. Characterizing can mean a variety of informational components including having a site map, photography, data and sonar images, or even knowing the name and vessel information.

“It’s no wonder our student programs appeal to our younger visitors,” said Gandulla. “You don’t have to be able to scuba dive 300 feet to have an interaction with maritime history. We provide and encourage hands-on experiences both in and on the water.”

The experiences are anything from a class trip to the sanctuary’s impressive Visitor’s Center, with over 10,000 feet of exhibits, participating in a program on shipwreck archeology, or building underwater robotics. There are also glass bottom boat tours that allow visitors to view shipwrecks without ever getting their feet wet. Gandulla says it’s not uncommon for students who have had a field trip in elementary or high school or invested themselves in a Shipwreck Alley class to later become a volunteer as an adult.

While all of this is available in our state’s backyard, people from around the world come to marvel at these maritime catacombs, as well.

“Beyond the rich and special maritime history of this area, it’s also a remarkable place to vacation,” said Gandulla. “We have world class recreational opportunities available to us in Michigan and we feel very strongly about sharing them with people from around the globe.”