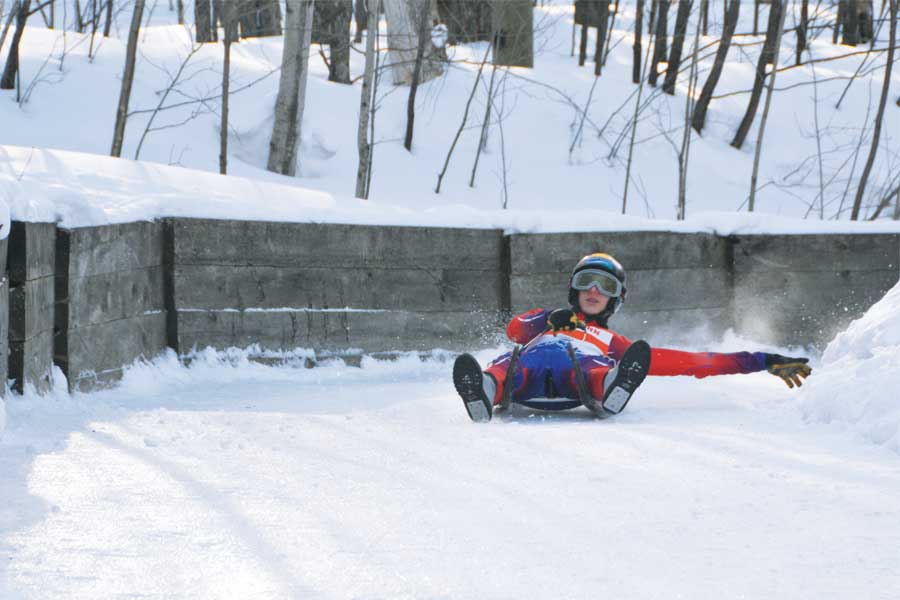 Most Michiganders have had the experience of climbing a snowy hill with a plastic or wooden sled in tow, plopping down at the top and pushing off to feel the cold, stinging air. Regardless of the bumps or wipeouts that follow, most people laugh like maniacs, stand up and brush off the snow, then climb the hill to do it all over again.

Far fewer individuals have the experience of sliding down a 280-foot hill at speeds ranging from 50–80 mph, but that’s just what’s happening in Negaunee, MI at the Upper Peninsula Luge Club. For more than three decades, beginners with wide eyes and daredevils with years of experience have made the trek up Lucy Hill to make their way down in increments upwards of a half a mile. All of this happens on a luge—which looks similar to an old-fashioned winter sled with metal runners.

“You don’t start fast,” Coach Levi Underwood is quick to explain. “Your first time, it’s just fast enough to get down the hill, and it’s still thrilling.”

The U.P. Luge Club has been holding clinics and open sledding for the public since the mid-80s. It provides local communities and tourists an opportunity to experience something few people ever get to do. Sliding (not “luging” as you might expect) isn’t available just anywhere, and Lucy Hill is the only natural luge track in the United States.

“Sliding, particularly on a natural track, isn’t something you find in every community,” said Tammy Wills, the current secretary of the luge club, former coach from 2010–2016 and a competitive slider herself since age 13. “Yet, this one-of-a-kind experience is in the middle of the Upper Peninsula and completely accessible and affordable.”

All that is needed are warm clothes, a hat and mittens—the U.P. Luge Club provides the rest. But this is not just for recreational sliders.

“I was hooked, and I wasn’t the only one,” Anderson explains. “Years later, two scouts from that first trip went on to compete at the Olympics. Wendall Suckow and Chris Thorpe became very successful sliders—Thorpe going on to become the first American to medal in luge at the Olympics. And they both came through this club.”

Remembering his experiences at Lucy Hill, Underwood, who competed for years in Europe and on the Olympic development team, came back to coach.

“I had so many great teachers, Tammy included, who showed me how an athlete could be humble enough to coach,” said Underwood. “And I wanted to give back to this sport that gave so much to me.”

The joy seen on the faces at the U.P. Luge Club comes from all sorts: individuals who have fallen in love with this unexpected sport; novices who are taking their first slide down a track; adrenaline junkies looking for another hit; and that inner child who remembers the freedom and excitement that comes from climbing up a hill, sitting on a sled and just letting go.