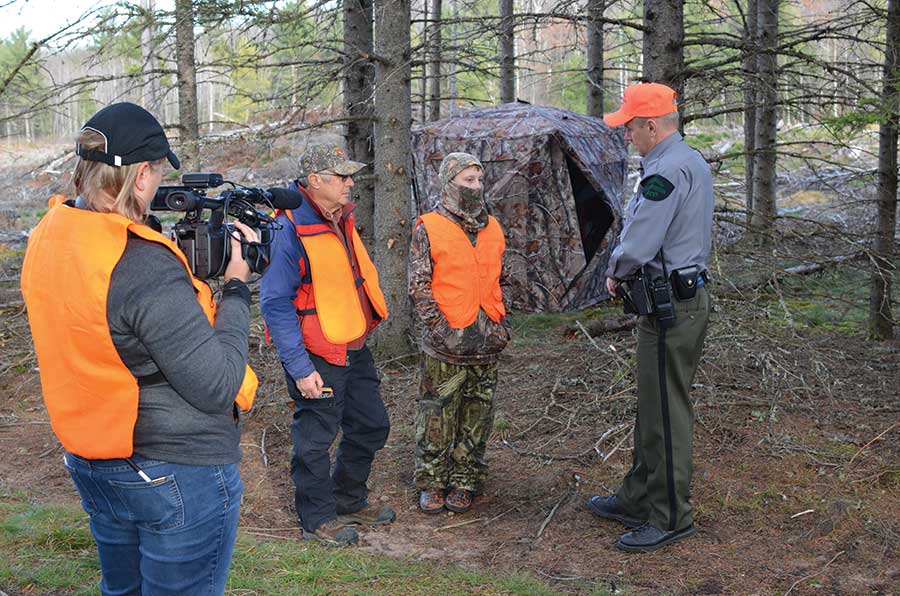 The Michigan Department of Natural Resources’ (DNR) mission statement makes its purpose clear: maintain the safety of all while enforcing the laws that safeguard the natural resources of our state. Just like their fellow police officers, the conservation officers of the DNR are committed to serve and protect—even when their jurisdiction includes serving and protecting water, wilderness and wildlife around the state.

It’s noble work, and yet the approximately 250 conservation officers aren’t often seen or recognized for their efforts. That’s because this small number of conservation officers must cover the entirety of both the Upper and Lower Peninsulas—making their districts sometimes hundreds of square miles.

However, Michigan conservation officers are becoming much more noticeable since the 2017 airing of “Wardens” on The Outdoor Channel. The show,
which up until 2016, had been filmed in the state of Montana, has now turned its camera lens on The Great Lakes State.

“The resources in Michigan were one of the main reasons The Outdoor Channel had its eye on Michigan as a new location for ‘Wardens’,” said Jon Ross, senior editor of Wolf Creek Productions, the producers of the show. “Great hunting, off-road vehicles, lakes and rivers—Michigan is ripe with hunting, fishing and outdoor recreational experiences.”

“Wardens” chronicles the lives of conservation officers across America, with the focus on Michigan’s finest.

“Our goal from ‘Day One’ was to use this partnership (between the Michigan DNR and The Outdoor Channel) as an educational tool,” said Ken Silfven, special advisor for communications at the DNR. “It’s important that citizens not only understand what we do, but why we do it.”

The DNR is committed to ensuring all of Michigan’s residents and visitors are able to enjoy the outdoor recreational opportunities of the state. It’s the conservation officers’ responsibility to make sure that is done both safely and legally.

“Wardens” showcases the men and women who protect our public lands in a variety of situations, such as nabbing poachers in high-stakes sting operations, snowmobiling through grizzly bear country, or tracking down illegal fishing operations in freezing rivers, lakes and streams. The show seeks to bring an understanding of the conservation officer’s job and why state laws need to be enforced. It also looks to generate interest in outdoor recreation while enhancing the public’s appreciation of the DNR’s role. As a bonus, the program has increased recruitment efforts by sparking interest in careers as Michigan conservation officers.

“The show was meant to educate viewers about the need to protect our natural resources,” said Silfven. “It is also meant to give them a firsthand look at the men and women who wear the green and gray uniform of a Michigan conservation officer. Based on the feedback we’re receiving, the show is doing just that.”