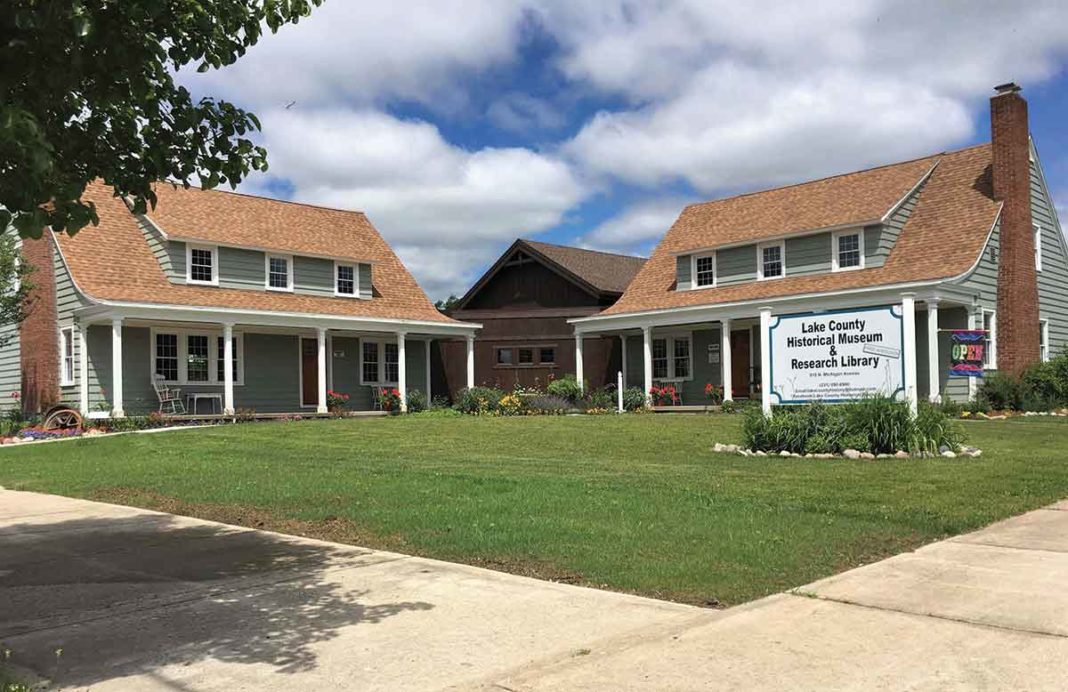 “A lake is the landscape’s most beautiful and expressive feature.
It is earth’s eye; looking into which the beholder measures the depth of his own nature.” —Henry David Thoreau

What is the magnetic allure of water? Why are people drawn to its shores, tides, and currents? For thousands of years, the Potawatomi, Chippewa, and Ottawa tribes lived by the waters of Lake County. Hundreds of years later, Bruce and Jenny Micinski came seeking a rural area to escape the commotion of South Bend, Indiana. Since then, Bruce has worked to preserve the history of Lake County’s peoples as president of the Lake County Historical Society.

“When I started to learn about Lake County history, I was fascinated by the stories and interesting places in the community and it just took off from that,” said Micinski. “I was elected temporary president in 1983, and I’m still president today.”

Today, Lake County is a tourist destination for hunting, camping, and trout fishing, boasting 156 lakes and 46 trout streams. Its wealth of trout can be traced back to a chance occurrence in 1884, when a passing train stopped over a railroad trestle on the north branch of the Pere Marquette River—today known as the Baldwin River. The train carried milk cans full of trout fingerlings whose health was being endangered by the warming weather. The fish were saved by being poured into the river below. This would be the first-ever stocking of wild German brown trout in America, and the beginning of a tradition that has continued for more than a century.

While fishing is an important part of Lake County’s history, Lake County’s diverse community is its most interesting aspect to Micinski.

“Lake County was a melting pot of people from all over,” said Micinski. “From African Americans to civil war soldiers who homesteaded here, to the logging era where Italians, French-Canadians, Scandinavians, Irish, and others worked in the lumber camps and on the railroads—Lake County has always been a very integrated community.”

For Micinski and the Lake County Historical Society, their work to preserve history is making history all its own. For more than 30 years, they organized exclusively for the collection of historical documents and artifacts, the dissemination of historical information, and the provision of a museum. In 2016, they achieved a key milestone in their history when they founded their permanent home and opened the Lake County Historical Museum and Research Library.

“We have a lot of history for a small community and the community really supported our efforts to bring this museum to life,” said Micinski.

The property the museum now sits on in downtown Baldwin was sold to the Historical Society by the county for one dollar. In addition, the community supported the museum’s birth with more than $400,000 in in-kind gifts and more than $600,000 in private donations and grants— including nearly $7,000 from Great Lakes Energy’s People Fund.

The museum buildings are a piece of history themselves.

A pair of 1938 residences built by the Civilian Conservation Corps for the United States Forest Services district rangers serve as the museum and community house. The forest service donated the buildings to the historical society after they were decommissioned, and they were moved to the museum site in 2014 where they began renovations. Nearly 2,000 volunteer hours later, the museum opened to the public in spring of 2016, followed by the “Boat House” in 2018, to welcome more than 3,000 visitors through the end of the year. Now open, the museum operates entirely on volunteers committed to its mission.

“We are very thankful for the community’s support and interest,” said Micinski. “Since we’ve opened, the artifacts the community donates has skyrocketed and is hard to keep up with. It’s a great problem to have.”

“Our goal is there’s always something new for visitors to see at the museum,” said Engelman.

Current exhibits include information on Idlewild, the celebrated African American community, and the Green Book—a guide for African Americans to travel safely during the civil rights era. Visitors can also see into the past with the family portrait series of the Kahl family from Baldwin who photographed people over decades, and 100 Years of Bridal Fashion. In the Boat House, the building linking the museum and community house, the rich history of the area’s waterways is on display, featuring a 1949 Chris Craft and 1950 MacDougall fishing guide boat, as well as an exhibit showcasing the work of Josephine Sedlecky-Borsum—an avid Michigan fly tier who tied for the Smithsonian Institute. Her fly patterns remain popular today.

In addition to its exhibits, the society also offers programs at the museum and in the community. Monthly historical presentations range from outreach at local schools to “Folk Fridays,” the summer concert series bringing folk music to the community from national musicians.

“I am very passionate about introducing history to children, so our museum is different from most,” said Engelman. “With very few exceptions, visitors can touch every artifact. Kids can learn so much more from picking items up rather than seeing them on a shelf.”

For the Lake County Historical Society, preserving history also means preserving the natural resources the area celebrates. The society is proud to have a partner in Great Lakes Energy in this effort. The cooperative, along with its power supplier Wolverine Power Cooperative, now provide members with electricity that is more than 60% carbon-free.

“Nearly all our board members are members of Great Lakes Energy, as are most of our museum visitors,” said Micinski. “As we look at our history, and the area that draws people for its clean air, water, and tranquil setting, we’re excited to have a utility that makes keeping the area clean for future generations a priority.”

The Lake County Historical Society and Research Library is located at 915 N. Michigan Avenue in Baldwin, Michigan. The museum is open from April through December, Wednesdays through Saturdays, from noon to 4 p.m. The research library is open noon to 4 p.m. on Wednesdays and by appointment. Admission is free. Donations are welcome and appreciated.

For more information, call 231-898-6500, or find the Lake County Historical Society/MI on Facebook.

To learn about more Great Lakes Energy members making a difference in the community, visit gtlakes.com/yourpower.