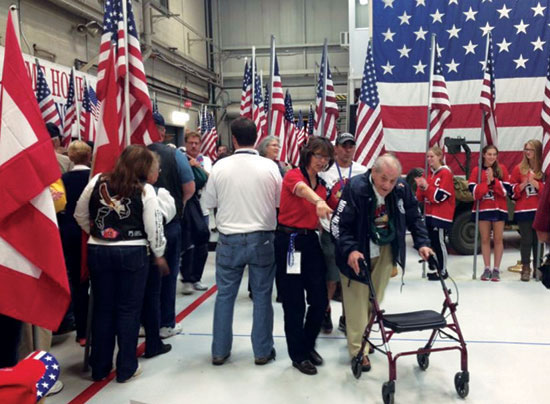 World War II seems like ancient history to a lot of folks. After all, it ended nearly 70 years ago! Never mind that 16 million Americans served, and over 400,000 lost their lives in a war spanning 61 countries. Despite the staggering statistics, school history books dedicate little more than a page or two to what many today call “The Greatest Generation.”

Recently, I was privileged to join 150 WWII veterans and volunteers as they set off to rewrite a page in history during a “Tour of Honor” thanks to Mid-Michigan Honor Flight. Embarking on a one-day tour of Washington, D.C., that included stops to Arlington National Cemetery, Iwo Jima and of course, the National World War II Memorial, veterans learned first-hand the scope of this country’s gratitude.

Dedicated in 2004, the WWII Memorial serves as a fitting tribute to the magnitude of this global conflict. Set between the Washington Monument and Lincoln Memorial, stone architecture, bronze sculptures and water features pay homage to both the Atlantic and Pacific theaters. More impressive, though, were the tourists who stopped to salute or shake hands with members of the Honor Flight as they walked by. Hearing young and old alike say “thank you” reminded me that in an era when history might be lost to the archives, there are still many who care.

Averaging 92 years old, many veterans pass before having an opportunity to see the monument built in their honor. Honor Flights transport WWII and terminally ill veterans to Washington, D.C., where they can visit the memorials dedicated to their service and sacrifice.

Paired with an attentive guardian, each vet was personally escorted from one memorial to the next with a volunteer staff of medics on-call in case of emergency. Every effort is made to make this a once-in-a-lifetime experience. From the corridor of flags lining a path to the departure gate at Cherry Capital Airport to the Pin Curl Girls singing us off at Reagan International Airport to the welcome home celebration at the U.S. Coast Guard Base in Traverse City, no detail was overlooked.

And while attention to detail is obviously critical to the enjoyment and safety of those participating in an Honor Flight, the unplanned displays of gratitude were often the most touching. A man walking through Arlington National Cemetery dropping his bags to salute our three-bus motorcade. A group of middle school students stopping to give thanks. A tour guide inviting a veteran to share his story. A veteran commenting softly in front of the Freedom Wall, “I never thought I’d see this.”

Reporting for WTCM Radio, I wasn’t paired with a veteran like most others traveling that day. Still, I had a few sentimental moments of my own. As I silently thanked my dad for his service in the Pacific Theatre as a member of the Fifth Air Force in New Guinea, I had the undeniable feeling he was with me while I paid reverence to a monument he didn’t live to see.

Harry Truman once said, “Our debt to the heroic men and valiant women in the service of our country can never be repaid. They have earned our undying gratitude. America will never forget their sacrifices.” Within the next five years, most, if not all of our WWII veterans will be gone, and with them, a living piece of history. So the next time you see one, say ‘thanks’. Because we all know freedom isn’t free. And it’s never too late to thank a veteran.