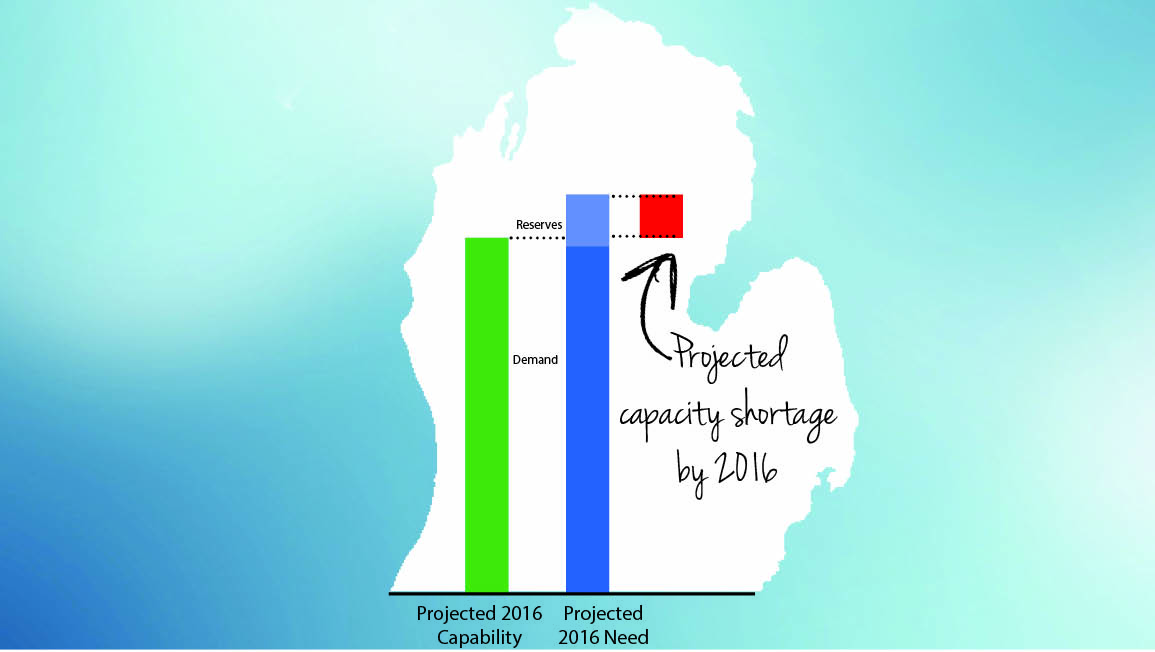 Have you ever wondered why a grocery store builds 15 check-out lanes, but only has three of them open most of the time? Simply put, the store has built its “lane capacity” to meet peak demand, the roughly 10 percent of the year when the store is busiest.

It works the same way for electricity providers, including your electric cooperative. Most of the time there are enough power plants and renewable resources running to meet our member-owners’ needs. At other times, particularly on very hot or cold days, energy needs increase and additional electricity is needed to meet this “peak demand”.

Unlike the grocery store, where a capacity shortfall means a longer wait in line, a shortfall in electric capacity can cause the lights to go out. And, it is your electric cooperative’s job to make sure it has the capacity to meet its members’ maximum need at all times.

The startling fact, however, is that the Midcontinent Independent System Operator (MISO) estimates that Michigan’s Lower Peninsula is facing a 3,000-megawatt (MW) capacity shortfall as early as 2016. The “mitten” needs roughly 15 percent more generating capacity than is currently operating. Ironically, MISO is projecting the Upper Peninsula will actually have a small amount of excess capacity beginning next year.

What is causing this projected deficiency, why should you care, and what are electric cooperatives doing to ensure that the lights stay on for you, our member-owners?

Who is MISO and why are they projecting a shortfall?
MISO is the independent nonprofit grid operator, based in Carmel, IN, that is responsible for operating wholesale electricity markets in both of our peninsulas, much of the Midwest, and parts of Canada. Electric utilities in MISO are required to have enough generating capacity to meet their projected peak needs as well as a 15 percent “reserve” margin each year.

Lower Peninsula utilities, MISO warns, will not have adequate generation and reserves, starting in 2016, because of projected growth in electricity sales combined with the closure of many, older coal-fired power plants throughout Michigan and the Midwest that will not meet new air quality standards required by the Environmental Protection Agency.

In October 2015, Wolverine announced the development of a new, 400-plus megawatt clean natural gas-fueled electric peaking plant. Located west of Gaylord, it would meet the future needs of Wolverine’s member distribution cooperatives. However, the Lower Peninsula needs nearly seven more plants of this size if it expects to meet MISO’s estimated shortfall.

Wolverine is working to obtain necessary approvals from local, state and regional agencies, and if all goes well, construction on the plant could begin later this year. Named the Alpine Generating Plant, Wolverine will use clean natural gas to generate electricity during times of peak demand and to generate energy that complements the ever-increasing amount of intermittent renewable energy in our state.

Even more capacity needs to be built soon.
I am proud to say that Wolverine is doing its part to meet the future needs of its member cooperatives, as are others, such as municipal electric utilities in Lansing and Holland. But we need more capacity to be built very soon.