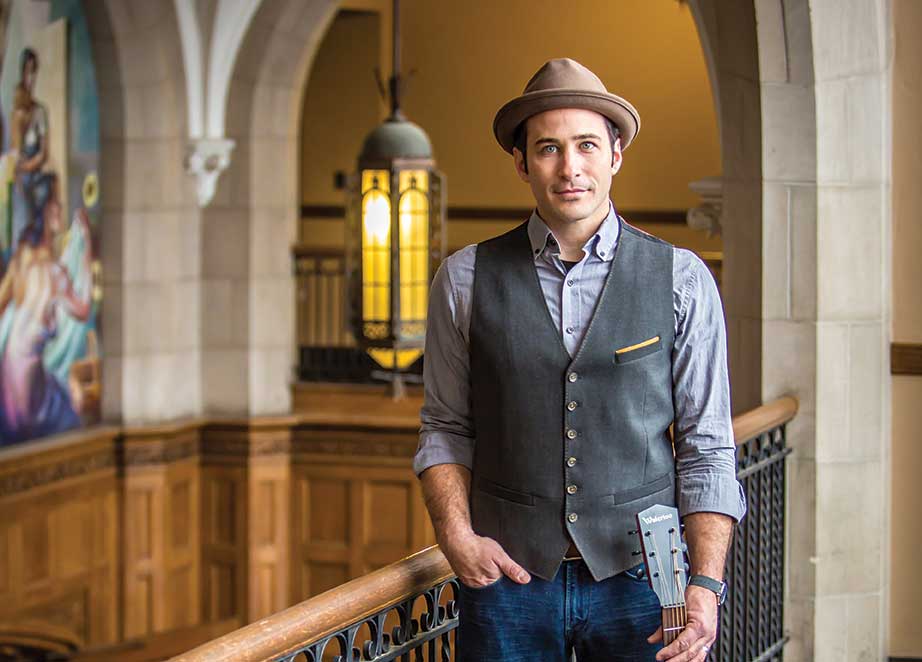 Many people were introduced to Joshua Davis on NBC’s The Voice, where he stunned audiences with his authentic, grassroots sound and Midwest charm. However, those who are tuned into the Michigan music scene have known Davis for ages, both as a solo artist and member of the popular band, Steppin’ In It. Fans close to home weren’t at all surprised by his popularity on the show or that he made it all the way to the show’s finals.

Born in Marquette and raised on the east side of the state, Davis comes from deep roots in both music and humility.

“My parents lived off the grid—in the woods, no running water, no electricity. Real pioneer-type stuff,” Davis said. “They took me to folk music festivals as a kid and all of that really had an effect on me.”

Davis describes folk music as “music by and for the people,” and that legacy has definitely impacted his career and his lifestyle.

“There was a point where my wife and I knew we either wanted to move to a larger city or find a place in the country,” explained Davis. “Eventually we chose a home in Leelanau County. We’d been coming up here for years—playing music, vacationing, camping—it’s remarkable—all the beauty, fresh water and community we have here.”

Community is another popular theme with Davis, who is a member of Earthworks Music, a collective group of independent artists who use music to raise awareness, mentor youth, build community and celebrate local culture. While Davis is involved with many community efforts that range from social and hardship causes to environmental work, he notes that fine arts education for kids is especially close to his heart.

“Obviously, I love music and I think it’s important to pass on the history and power of music to kids,” said Davis.

Davis has taught classes at Interlochen, the prestigious music school in northern Michigan. He has taught songwriting and instrumental classes to children, as well as adults, through the school’s College of Creative Arts program.

“Interlochen is an incredible place,” said Davis. “There’s such a unique energy there and so much talent and enthusiasm; it’s hard not to be inspired by the students.”

Davis has settled back into life in the Mitten State after the rush of additional attention created by The Voice. While Los Angeles provided an opportunity of a lifetime, this husband, father, activist, teacher and, of course, musician has returned home to Michigan where there’s nothing like real life to inspire new music.

After The Voice, Davis got right back to the studio, cutting a seven-inch vinyl with two tracks “Always Gonna Be Here For You” and “Let Me In.” These tracks are included on his most recent album, The Way Back Home, released in February 2017.