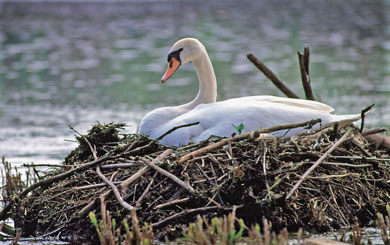 Swans have a special place in art and literature. Youngsters are told about the ugly duckling—a young bird that is ostracized by the others until it grows into a beautiful swan. Swans also figure prominently in several major operas and Tchaikovsky’s famous “Swan Lake” is among the most-performed of all classical ballets.

But, as with any species, there can be a downside. In Michigan, mute swans are the largest and most numerous, and have become a nuisance.

Why? There are just too many. Mute swans are often overly aggressive toward other waterfowl and humans. They are not native to Michigan and are crowding out other wildlife, doing considerable environmental damage to wetland habitats, and at times creating a public safety hazard.

Among the largest waterfowl in the world, mute swans can measure up to 5 feet long and weigh over 30 pounds, with a wing span of nearly 10 feet. So named because they make little sound—except for hissing when they’re agitated—they contrast dramatically with the aptly named trumpeter swans, which are a native species on Michigan’s threatened list.

The Michigan Department of Natural Resources (DNR) has partnered with other conservation groups for over a decade to increase trumpeter swan populations here. Although the effort is beginning to bear fruit, there is evidence that mute swans are getting in the way.

Mute swans were brought from Europe in the mid-1800s to adorn parks and private estates. The first Michigan pair was introduced in Charlevoix County in 1919, and we now have the largest population of them in the United States.

The DNR estimates breeding mute swan numbers at about 15,500—three times the number a decade ago—and expanding at about 10 percent a year. Long-lived (close to 20 years) birds capable of producing five cygnets per pair annually, they have few natural enemies.

Numerous mute swan attacks on small boaters (canoeists, kayakers, jet skiers) have been documented, some resulting in injury, and in one case death (in another state), when an angry bird capsized a canoeist. These birds will attack people on land who wander too close to their nests or young and drive other waterfowl—ducks, geese and other swans—from suitable habitat. For example, a nesting colony of black terns (also a species of concern) on the Michigan shore of the U.P. declined when mute swans nested nearby and drove them away. Black tern counts have been depressed in the area ever since.

Mute swans congregate in huge flocks and can inflict significant damage on aquatic habitat, feeding heavily on vegetation that is food and cover to fish and other wildlife. Anglers complain that swans virtually wipe out weed beds in some lakes.

But population-control efforts can bear fruit, as removal of mute swans has resulted in other species moving back into the habitat. At Crow Island State Game Area (near Saginaw), a pair of trumpeters took up residence after the mute swans were removed.

The DNR has long removed mute swans from game areas, where protecting native wildlife is the goal. But as the mute swan population continues to grow, the DNR has increased efforts to reduce them to 2,000 by 2030.

“If we didn’t do anything to reduce mute swan populations, we could have 24,000 in five years,” explains Barbara Avers, waterfowl and wetlands specialist with the DNR’s Wildlife Division. “If we allow this to happen, Michigan’s wetlands and wildlife would suffer and there would be unacceptable levels of conflict with people.”

Many conservation groups—including the Michigan Audubon Society, Ducks Unlimited and the Kellogg Biological Station of Michigan State University—are on board with the DNR’s goals.

The DNR dispatches aggressive mute swans that cause conflicts with humans and issues permits for private property owners to remove them or their nests or eggs. In the case of commonly held private property—such as a private lake—the DNR has rules to make sure a majority of the landowners agree before these permits are issued.

The DNR has a long way to go in bringing mute swans within their management goals, but considers it an important step in maintaining other native waterfowl populations, such as ducks, geese, and even other swans.