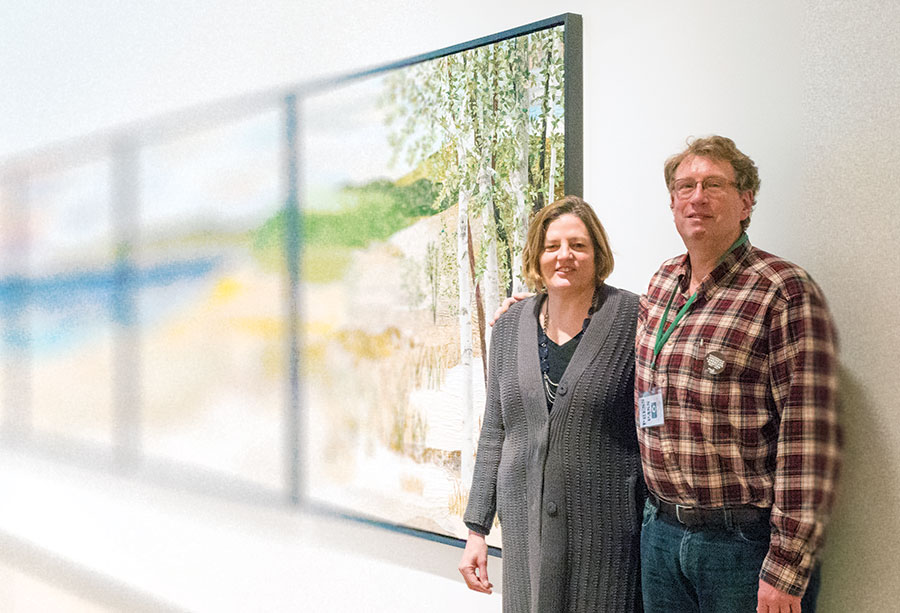 Artists are often seen as “rule breakers”—bumping up against the norm and defining new and different ways of both viewing and doing things. Few artists have been called “rule makers,” but that’s exactly what husband and wife duo, Steve and Ann Loveless, have become.

In 2013, Ann won the prestigious Public Vote Grand Prize at ArtPrize with her unique landscape quilt art piece “Sleeping Bear Dune Lakeshore.” Her unique collage and quilting technique dazzled visitors from around the globe with its 20-by-five-foot tall stature. The piece, inspired by her husband’s landscape photograph, put both Ann and northern Michigan on the map.

In 2015, Ann and Steve set out to create a piece together— melding Steve’s panoramic photography and Ann’s collage quilting techniques. The result? Northwoods Awakening—a huge quilt and photographic print hybrid that depicts a woodland panorama.

“Our creation begins as a traditional photographic print on the left,” says Ann, “Then blends various fabrics and textiles to metamorphose into an entirely quilted textile on the right.”

The two spent more than 1,100 hours on the piece, which assembles at an impressive 25 feet wide by 5 feet tall.

The ArtPrize crowds fell in love once more and awarded the couple the Public Vote Grand Prize—again.

Ann and Steve, whose art gallery is in downtown Beulah and who live near Crystal Lake in Benzie County—are never short on inspiration. Surrounded by water, woods and natural treasures like Sleeping Bear Dunes—there is always a new scene to capture.

“We’ve learned never to take our surroundings for granted,” said Steve. “It’s one thing to look at a scene, but another to actually see it.”

While inspiration is plentiful, the artwork itself is quite technical. Steve’s multi-row panoramic photography process can include capturing as many as 50-60 close-ups panning rows and columns. They eventually combine to make one panoramic photograph. It’s not dissimilar to the collage stitching that Ann does on the quilting end.

“The hardest part of working together isn’t the long hours,” said Ann. “It’s trying to combine the idea that’s in Steve’s head with the idea that is in my head. Communicating your vision is the challenge.”

The two certainly have overcome the communication challenge. So well, in fact, that ArtPrize has amended their rules—which no longer allows an artist to win the Grand Prize more than once, making Ann the only artist in ArtPrize history who will ever have won twice.

Just when you thought breaking the rules was pretty cool, it turns out that being responsible for the making of rules is the real artist’s way.