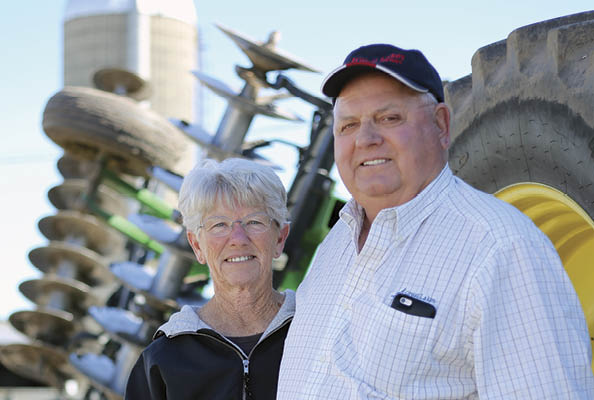 In the second week of June, Oceana County, also known as “The Asparagus Capital of the Nation,” gears up for its annual Asparagus Festival. Started in 1974, it’s the longest running asparagus festival in the country. It boasts all the events you’d expect—a parade, 5k run, arts and crafts fair, and the annual Asparagus Queen pageant.

Back in 2001, the grand marshal was a well-known figure in the industry—Dick Walsworth.

Walsworth, a second-generation asparagus farmer from Mears was happy to ride in the parade, but has always known that the real star is the asparagus.

“Oceana County produces two-thirds of the asparagus grown in the state of Michigan,” Walsworth says, proudly. “Considering Michigan is the second largest grower of asparagus in the country, that’s a pretty big deal.”

Walsworth got his start on the farm established by his parents, Walter and Anna Walsworth, in 1932, and purchased it himself in the early 1970s. He has since expanded the acreage. It is now owned by his son and daughter-in-law, Ryan and Janice, and at 260 acres, Golden Stock Farms is one of Michigan’s largest.

“The Lake Michigan shore is the perfect place to grow asparagus,” Walsworth explains. “The lake moderates the temperatures, keeping it from getting too hot or cold and preventing frost.”

The Michigan asparagus yields prove his point, producing up to 23 million pounds annually—an impressive harvest for a crop that produces primarily early May through late June. However, a short season isn’t the most difficult challenge facing the industry.

Walsworth identifies the increase in imported asparagus, labor demands, and the lack of local processing plants as pressing concerns. With countries like Peru and Mexico— who have very favorable growing conditions all year and large processing companies like Del Monte and Green Giant that have moved their plants to Peru—things are tough. Additionally, asparagus is a hand-harvested crop, meaning that labor costs are very expensive—an estimated 25 percent of gross sales, Walsworth says. Altogether, it means Michigan’s asparagus industry is facing real struggles.

As of 2005, those struggles are also faced by Ryan, who bought the farm from his father and mother.

“Ryan is confronted with a much different landscape than when I purchased the farm from my father,” Walsworth says. “Things are difficult, but we keep working on solutions.”

The Walsworths are most definitely problem solvers, as Ryan also recently took over his father’s role as chairman of the Michigan Asparagus Advisory Board. Dick also served for 30 years on the Great Lakes Energy Board of Directors and 25 years on the Wolverine Power Cooperative Board—providing valuable knowledge and insight to both. Walsworth retires from his seats this year, but is in no way sitting on the sidelines as he focuses on promoting renewable energy, as a member of the Spartan Renewable Energy Board of Directors.

At 74 years old, why does Dick Walsworth keep working so hard? “Once a farmer, always a farmer,” he says