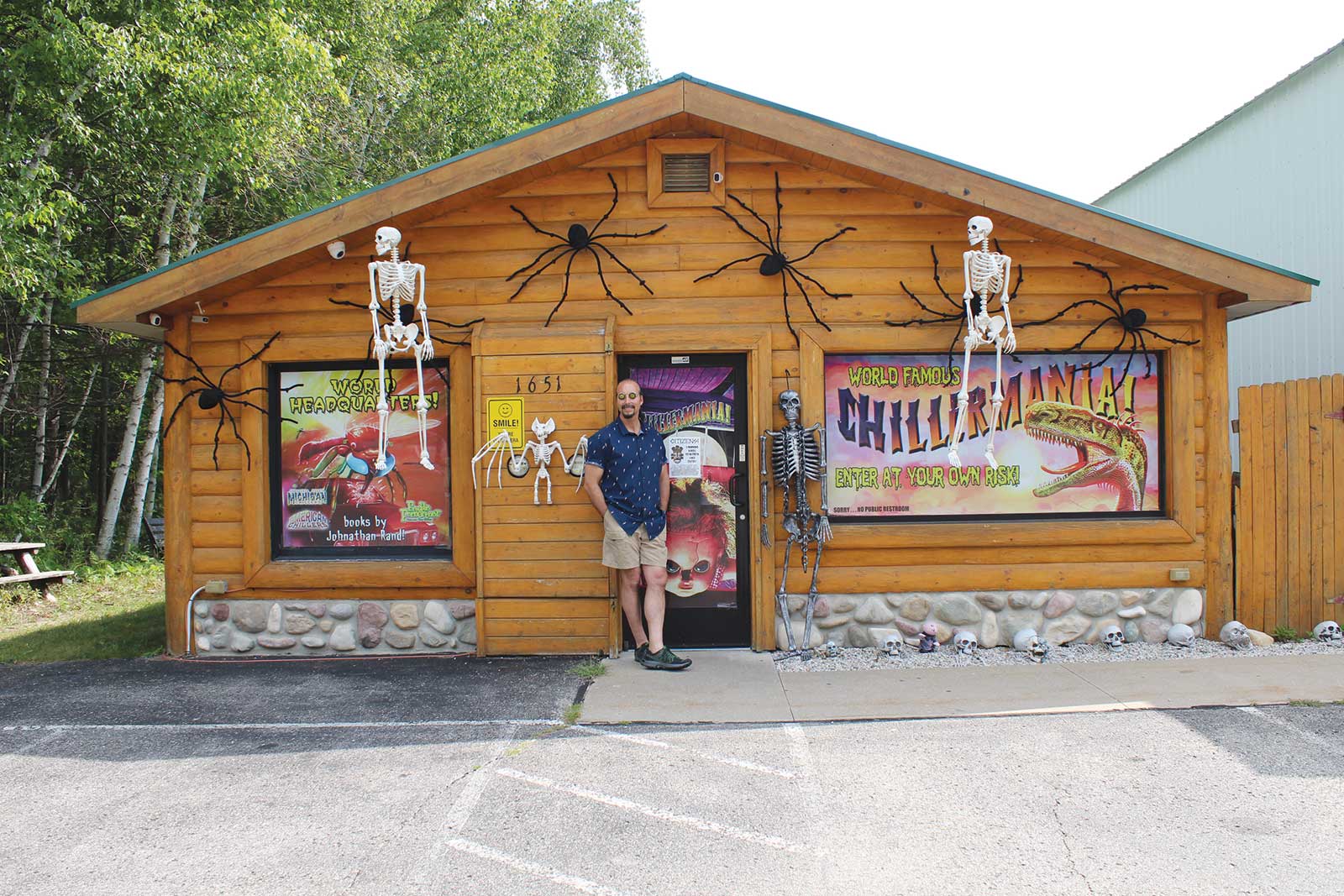 In “Mayhem on Mackinaw Island,” siblings Sandy and Tim Johnson spend their usual summer on Mackinac Island. But this particular holiday, they find themselves on not just a school vacation, but a real-life adventure.

Johnathan Rand wrote the story of the Johnson children and their curious adventure in 2000. The book joins nearly two dozen more stories in his “Michigan Chiller” series. They are an homage to the thrillers he would read under the covers at night with a flashlight when he was a kid. Could he have imagined that his own life would be a thrilling ride, not unlike the ones he depicts in his novels?

“I was the guy who brought a book wherever I went,” said Rand. “My wife used to look at me like I was crazy to grab a book on the way out to dinner. I wouldn’t read at dinner, but ‘what if?’ Books have always been important to me.”

Rand, his pen name, started in radio as Christopher Wright. And then eventually Christopher Knight, to avoid confusion with a competing on-air personality. While there, he became the go-to guy for writing and producing advertising spots, which were the real money maker for the station. Everyone loved how he threaded stories into his 30-second spots, and that was the first nudge Rand received that he’d like to become a writer.

“I’d write the spots using characters and situations to make the stories come to life,” said Rand. “But then I realized I had a bunch of interesting story ideas bouncing around in my head. So, I finally decided to do something with them.”

His first novel, an adult thriller written back in 1995, was originally picked up by a publishing house where, like many manuscripts, it sat. Not one to wait for something to happen, Rand, who wrote his adult ventures under Christopher Knight, wrote his second and then third offerings, which he chose to self-publish.

It was in 2000 that he started his “Michigan Chiller” series for younger readers, also self-published. Rand imagined families venturing to Northern Michigan for their vacations and kids wanting to take away a story from their travels. While bookstores are rarely on the itinerary for tourists, Rand knew that everyone needed to eat, sleep, and get gas while in town. So, he and his wife would pack up their car with books and stop into every motel, restaurant, and gas station they could find, offering books on spec to the establishments.

“At first, folks balked. But years in radio and advertising kicked in,” Rand joked. “I’d make it easy, leave some copies and check in later. No commitment. And I’d leave before they had time to argue.”

Sooner, rather than later, Rand would get a call from the establishments asking for more copies and regaling him with tales of families asking if there were more stories and where they could find them.

The stories were up in Rand’s head and eventually came pouring out at an alarming rate. With 20 in the “Michigan Chiller” series, 43 in “American Chillers” plus other series—”Freddie Fernortner” and “Dollar Store Danny,” along with others—it’s a wonder Rand can keep up the creative pace.

“It’s an old adage, but when you love what you do, you never work a day in your life,” said Rand.

Rand and his wife also opened up ChillerMania, a bookstore in Indian River, betting against the old norm that northern vacations wouldn’t include a stop at a bookstore. He also offers writing seminars and book camps. It’s the speaking engagements in the schools that Rand speaks especially warmly about. It’s as if he’s looking to inspire another young person to sneak a book and flashlight into bed at night for a chance to read just a few more chapters.

“I love talking to kids about reading and writing. Especially when I see a kid who didn’t like to read, but does after getting ahold of one of my books,” said Rand. “I also let them know it’s hard work. A book may be fun and easy to read, but there’s a lot of hard work behind it.”

For a man who writes about things that are meant to give the reader a bit of a fright, it’s clear hard work isn’t something that Rand has ever been afraid of.