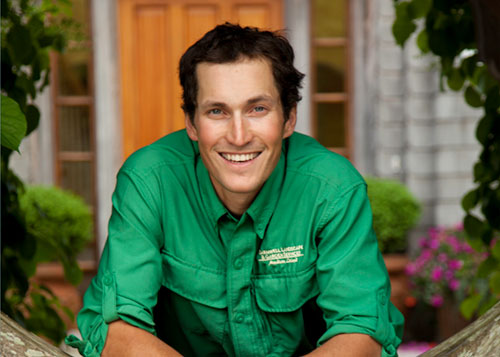 Mackinac Island has been getting a facelift. It’s the kind that requires rakes and shovels, because it’s a facelift in flowers and plants. Barnwell Landscape & Garden Services has been designing and planting picturesque gardens for six years—with boatloads of colorful flowers—around Mackinac’s stately Victorian homes and historic businesses.

Jack Barnwell and his crew are painting the island, which is served by Cloverland Electric Cooperative, with a fabulous array of dazzling petunias, sweet-smelling alyssum, and gorgeous larkspur, to name a few. “We’ve more or less created what has become the ‘Mackinac Island look,’” says Barnwell, who spends much of the winter coming up with new designs for over 130 island clients.

It seems Islanders didn’t know they needed Barnwell’s services until he started sprucing things up. Now, he says people can’t wait to get their landscaping done as early as possible. This creates a crunch for his crew who must rely on boats, bikes, horse-drawn buggies and strong backs to tote their plants and tools because motorized vehicles aren’t allowed on the island (except for emergency vehicles and snowmobiles).

It all starts before the sun comes up over Lake Huron. “The boats arrive at 3 a.m. with annual flowers,” Barnwell says. “We’ll get the hanging baskets up downtown before it gets busy with tourists.” The remainder are bedding plants that must go directly into the ground. This all has to happen as soon as the weather starts getting nice, including accepting the delivery of six semi-trailer loads, brought over by Shepler’s Mackinac Island Ferry. “We have trusted them with hundreds of unique loads,” says Barnwell, whose company also plants trees, installs irrigation, and does stone work.

Dealing with the spring demand can be a challenge. “It’s such a short season to make their money,” he explains of the businesses he caters to. “My clients depend on it (the flowers) so much for their image.”

Barnwell relies on 12 workers to get the job done without pickup trucks, loaders and skid steers. They make it all work with horses, oversized bike baskets, trailers attached to bikes, and ancient ingenuity.
“I often tell my crew to ‘think like an Egyptian,’” Barnwell adds, “because all these concepts are not new. Many were used for 1,000 years to build some amazing structures, some which are still standing today.” For the heavier work, they’ve retrofitted standard ball carts (meaning the root ball of very large trees), used to move large trees and boulders, into three-wheeled swiveling carts that can handle more weight over long distance with less effort.

“We also use a lot of winch and come-along setups, block-and-tackle pulley systems, and good ol’ fashioned leverage,” he says. “It’s amazing what can be moved with the right fulcrum point.”
The Barnwell crew’s work is also a central feature in the Grand Garden Show, a joint venture with the Proven Winners® company, the Grand Hotel, and Barnwell Landscape. The second annual event is Aug. 24–26