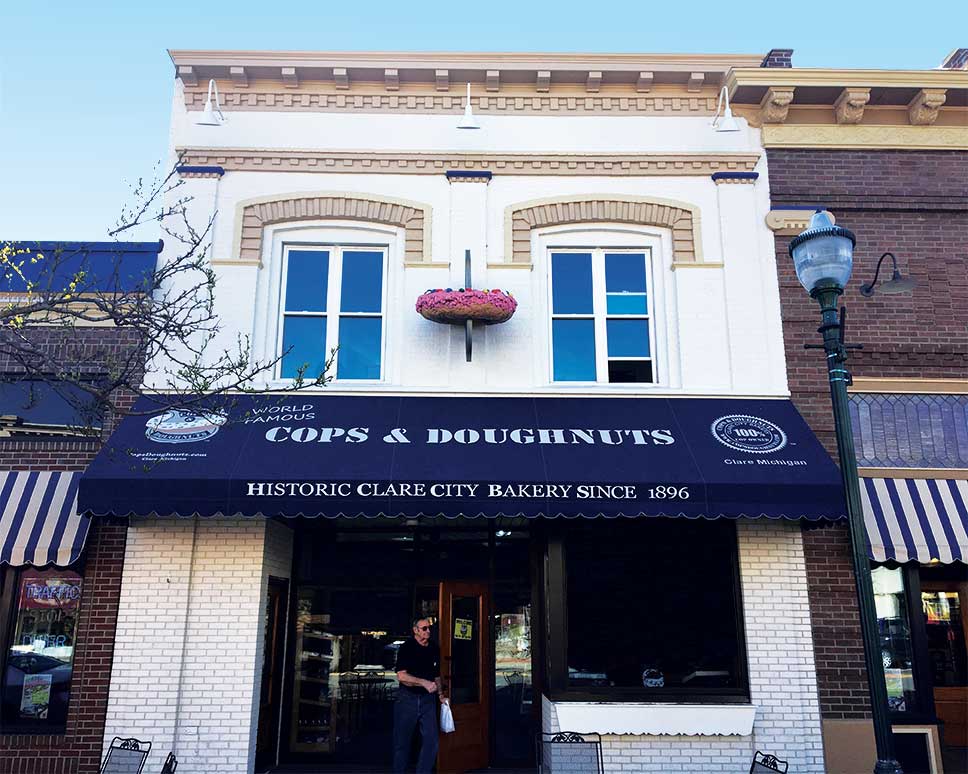 There’s something sweet happening in Clare, Michigan, and it’s on a roll.

It started with a classic tale of a group of small-town police officers sitting in a local doughnut shop back in 2009. But then a twist occurred—the owner of Clare City Bakery told the officers he had to sell the bakery, which was one of the few open storefronts in the two-block downtown area of Clare. The officers lamented, continued talking and were struck by a thought—what if they bought the bakery?

“At first we laughed at [the thought of] a bunch of cops buying the only doughnut shop in town,” said Al “Bubba” White, the now vice president of Cops & Doughnuts. “But eventually we stopped laughing.”

The recession had hit hard and the police force saw their small town slowly close storefront after storefront. Eventually, Clare City Bakery, a shop that had been around since 1896—surviving wars and the Great Depression—looked like it was about to be lost as well.

After making calls to the owner and quick talks among the nine-member police force, the deal was finalized within two weeks. Clare City Bakery became Cops & Doughnuts: Clare Precinct.

Without much business experience, White, along with now-president Greg “Ryno” Rynearson, as well as the other officers/owners, kept some of the bakery’s key recipes along with the head baker. The result was a good first day.

It wasn’t long before the story of a bunch of cops opening a doughnut shop caught some attention. They got a call from a reporter with The Associated Press, confirming that they were, in fact, a bunch of cops who opened a doughnut shop. Before they knew it, the guys
were fielding interviews from “NBC Nightly News,” “Fox and Friends,” and “Good Morning America.”

When asked why he thinks Cops & Doughnuts is a story, White has some ideas.

That combination, plus a healthy dose of good humor and community spirit, seems to be working in a big way. The Cops & Doughnuts crew saw that they had a good thing and knew they could grow. But where to expand became the next question. It had been important to them to save their beloved Clare City Bakery and the important role it had played in their story. So, what if they could save another historic bakery?

The group expanded to McDonald’s Bakery, a fifth-generation establishment in Ludington, Mich., followed by The Sutherland Bakery in Bay City, which originally opened in 1912. The crew then expanded and opened a precinct (or bakery) in Jay’s Sporting Goods in Gaylord, and finally, a gem in South Bend, Indiana, was acquired, known as The Dainty Maid Bake Shop. Each town was reinvigorated by the lively atmosphere and genuine love that White, Rynearson and the team have for the history, community and, of course, the bakery.

With five precincts, more than 500 retail outlets, and approximately half a million customers visiting annually, Cops & Doughnuts is well on its way to their goal of “world domination,” they attest. However, at the very heart, it’s still a group of civic-minded public servants determined to protect the rich history of small-town bakeries by serving up great doughnuts.