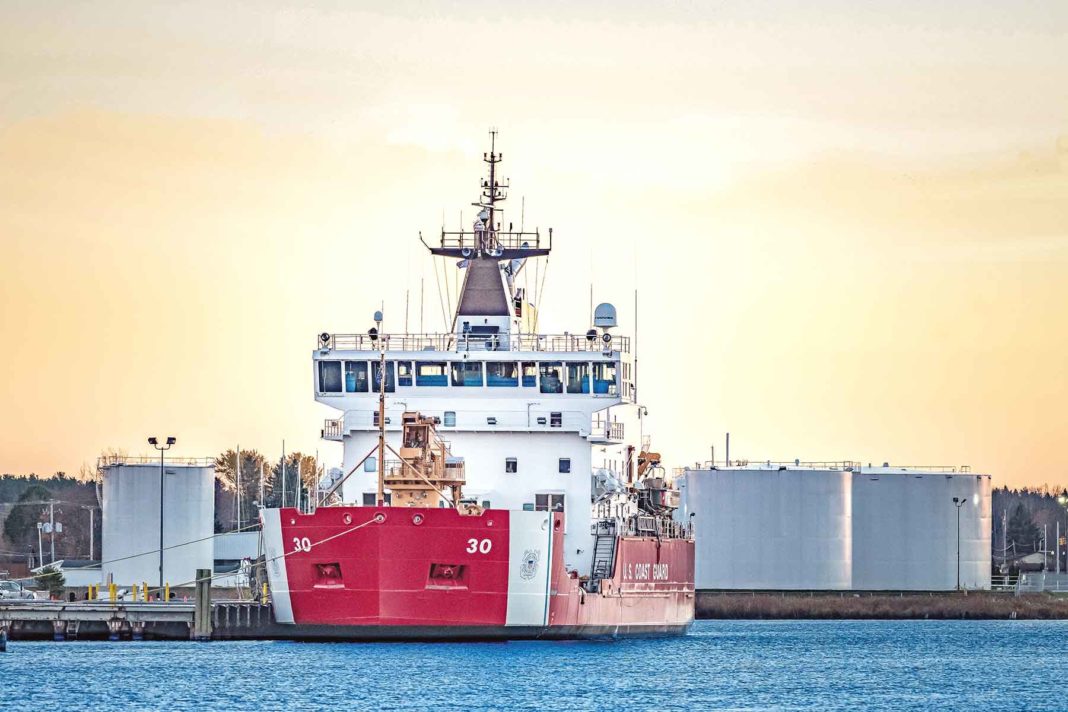 The Coast Guard’s motto is “Semper Paratus” or “Always Ready.” And ready is what you have to be when navigating the miles of waterways that the United States Coast Guard Cutter Mackinaw (WLBB-30) oversees along the Great Lakes, Straits of Mackinac, and St. Mary’s River.

Mackinaw has a rich history, with its predecessor (Mackinaw WAGB-83) having been commissioned back in the World War II-era as a way to support the war effort and the transportation of resources along the Great Lakes. With weather along the Great Lakes being as it is, a ship that was capable of cutting through ice to maintain waterways and rescue trapped ships was a necessity. To keep commerce moving, cutters like the Mackinaw make tracks of broken ice through major shipping lanes and often conduct close-quarters maneuvering to free immobilized ships from thick ice.

As commerce increased and the need for oil and gasoline has become a part of everyday living, the usefulness of Mackinaw and its similar crafts has become irreplaceable. When the latest iteration of Mackinaw was commissioned in 2006, the retired ship found a home at its namesake, Mackinaw City. The current Mackinaw is 240 feet in length, with a displacement of more than 3,500 tons and is powered by three Caterpillar 3600 series 12-cylinder diesel engines. Between the two ships, Mackinaw is celebrating its 75th year in Cheboygan, Michigan.

“Mackinaw has a crew of about 60 and has three main missions—icebreaking, servicing aids to navigation (ATON), and search and rescue,” explains Lieutenant Junior Grade (LTJG) Carolyn Smith of the Coast Guard. “We also do a fair amount of public relations, as a branch of the military that is easily accessible and visible by the public at large.”

Residents and visitors of Cheboygan have frequent views of and visits aboard Mackinaw, even though it is busy year-round.

As the largest U.S. cutter on the Great Lakes, it spends approximately four months on the icy Great Lakes and surrounding waterways during the winter season.

She is equipped with two 4,500-horsepower Azipods, which are capable of turning in 360 degrees and breaking through 32 inches of ice at 8 knots astern, or 14 inches of ice when moving 10 knots ahead. Additionally, the Azipods are capable of blowing highly pressurized water through and under the ice, breaking thick ice nearly 100 feet from the ship without the hull of the vessel ever coming into contact with it.

This past winter, Mackinaw, along with other Coast Guard ships on the Great Lakes, conducted 429 vessel escorts through ice-filled waterways and 155 direct assists to vessels beset in ice over a 106-day period.

This translated to approximately $301 million worth (about 8.3 million tons) of dry bulk cargo critical to power generation, industrial productivity, and public safety.

In spring and fall, the Mackinaw tends to aids to navigation, pulling in and placing larger buoys in the spring and then replacing those with smaller winter buoys in the fall. The mission of ATON is to assist commercial and recreational mariners to determine their position, steer clear of hazards, and chart a safe course.

This year, Mackinaw celebrated 20 years of a less likely tradition—while conducting its fall ATON operations, Mackinaw delivered nearly 1,200 Christmas trees from northern Michigan to deserving families in Chicago. This custom started in the late 1800s with entrepreneurs who gave many trees away at the end of their annual Christmas tree delivery in the Windy City. The tradition was revived in 1999 as the Chicago Christmas Ship program. For the past two decades, the crew of Mackinaw has carried and unloaded these symbols of hope and goodwill at Navy Pier each year, just in time to deliver a healthy dose of holiday cheer.

“The longer I’m in the Coast Guard, the more I appreciate our missions and what we do,” said LTJG Smith. “Not only facilitating commerce and providing safety on local waterways, but we also have the opportunity to serve the people of the United States directly and immediately. It’s a privilege each and every day.”