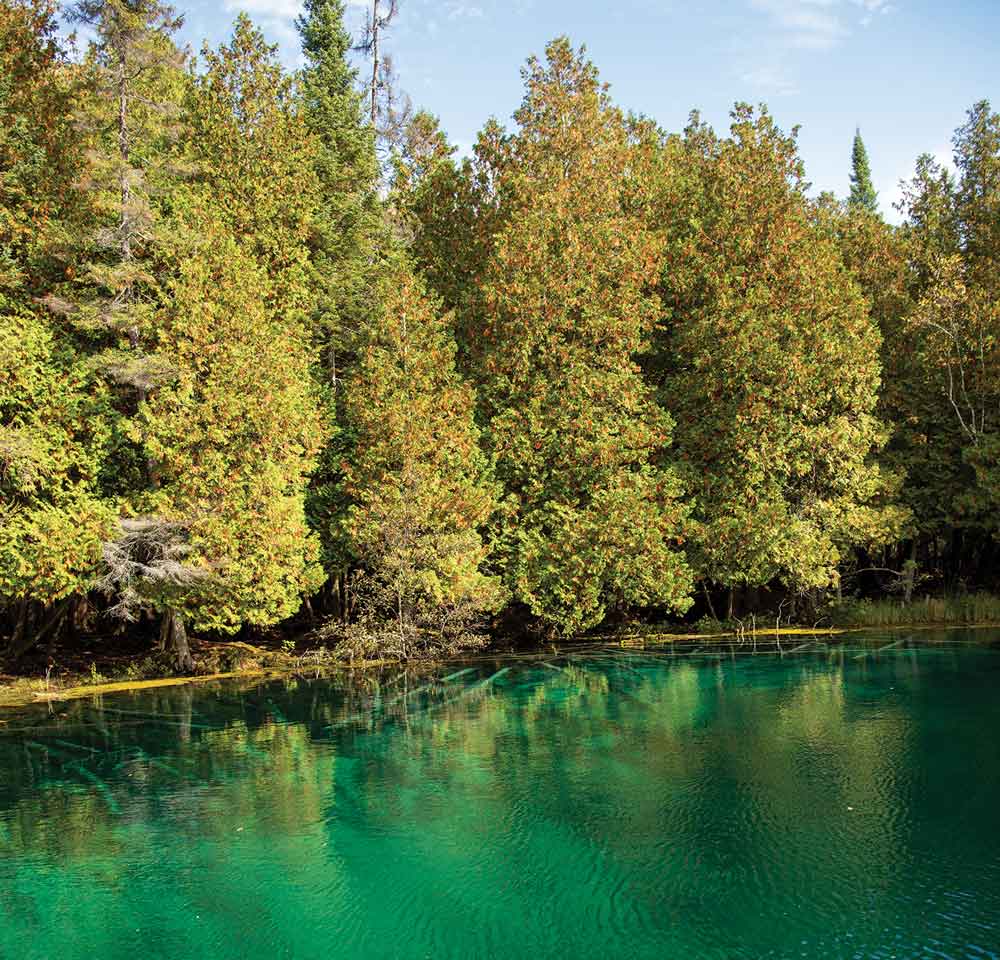 North on M-149, 12 miles from Manistique, lies gorgeous Kitch-iti-kipi (Big Spring), Michigan’s largest spring. It’s an oval spring measuring 200 feet in diameter and is 42 feet deep with an emerald green bottom. From fissures in underlying limestone flows 16,000 gallons of crystal clear water per minute of spring water throughout the year at a constant temperature of 45 degrees, so it never freezes. In any season, it’s quite a sight to see and to take in the color of the water, huge fish, and the water bubbling up from the floor of the spring. After taking a 50-yard paved path to the shoreline, a self-operated observation raft guides visitors to enjoy the fascinating underwater features.

The state of Michigan acquired Kitch-iti-kipi in 1926. History records indicate that John I. Bellaire, owner of a Manistique Five and Dime store, fell in love with the black hole spring when he discovered it in Michigan’s Upper Peninsula’s thick wilderness in the 1920s. The spring was hidden in a tangle of fallen trees, and loggers used the nearby area as a dump. Bellaire saw its potential as a public recreation spot. He could have purchased the spring and adjoining property himself. He persuaded Frank Palms of the Palms Book Land Company to sell the spring and 90 acres to the state of Michigan for $10. The property deed requires the property to be forever used as a public park, bearing Palms Book State Park’s name. The state of Michigan has since acquired adjacent land, and the park now encompasses over 300 acres.

A fun fact about the fish you see in the emerald waters of Kitch-iti-kipi is that some are “retired” moms and dads to all the fish that get released from hatcheries, which we enjoy throughout the upper and lower peninsulas in our lakes and rivers. These are the fish hatcheries that supply millions of trout (lake, brown, rainbow and brook) to be bred and raised, and released into Michigan lakes. Kitch-iti-kipi is where the trout live out their days. You’ll know which fish these are, as they may have only one fin, where others have two fins. These fish are typically over 25 years old!

Make Kitch-iti-kipi a stop on your next adventure, it will not disappoint. A great pure Michigan beauty for all ages to enjoy!