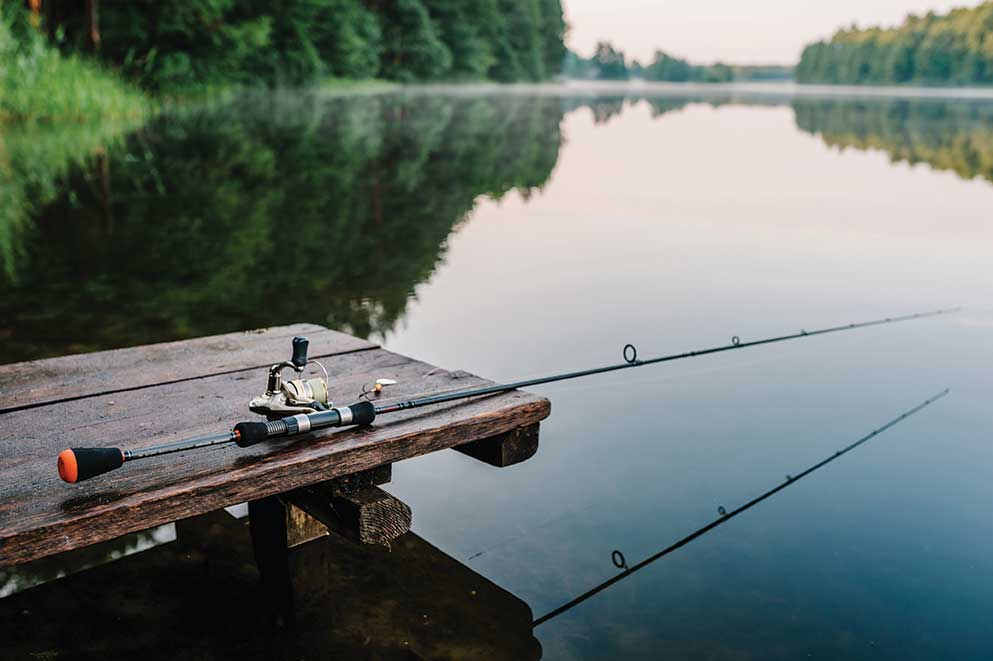 By Rick Fowler, Great Lakes Energy member
Rick taught high school English in Boyne City for 34 years. For the past 25 years, he has been an outdoor freelance writer.

At 5 a.m. on any of the bodies of water I venture to, be it a lake, river, stream, or pond, I am inundated with a myriad of sounds. The slow, rhythmic lap of waves reaching the shore after a night of travel is indeed soothing early in the morning.

The plop of fish on calm waters just before the sun breaks makes an angler’s heart race. The head turns quickly in an attempt to see what it was that raised so quickly and, like an Olympic diver, reenter with only splash rings remaining, spreading like oil on the water. In fact, when the boat engine is cut or the paddles raised, the serenity of a moment like this is spine-tingling.

With a headlamp, waders, rod, small tackle box, flies and other bait, I descend the muddy bank of my favorite river. The eastern sky is lit brightly with an easel of colors, making my climb down to the waters edge flashlight free. The squish and clomp of my wading boots seem to be twenty decibels higher than they need to be. As I approach, there is an eerie screech reverberating from the tree line. The Blue Herons’ hollering momentarily blocks out the roar of the rushing water.

As I near, the finger pier is empty of anglers on this particular morning. Many fishermen will be approaching the mouth soon to test their skill against the steelhead that are now making their way toward the inlet. The rapid flow of water cascades down boulders forming a chaotic scene as it bubbles back up. My line remains steady in the calm water beyond the little falls. I remember not too many years ago bringing my two children here. Armed with fishing gear, Barbies and GI Joes, we had claimed our spot. Amid the yelps of lucky fishermen and those who weren’t so lucky, I heard the laughter of my kids. Today, even though both are now in their late twenties, I can still get them to “wet a line” with me.

Every so often I feel like a little wave that thought his purpose was gone when he reached the sandy shore. However, the memories, the stories, the sights that a morning offers keep me trickling back to Michigan waters to fish. I have this sense that if I don’t, it will be the end of something.