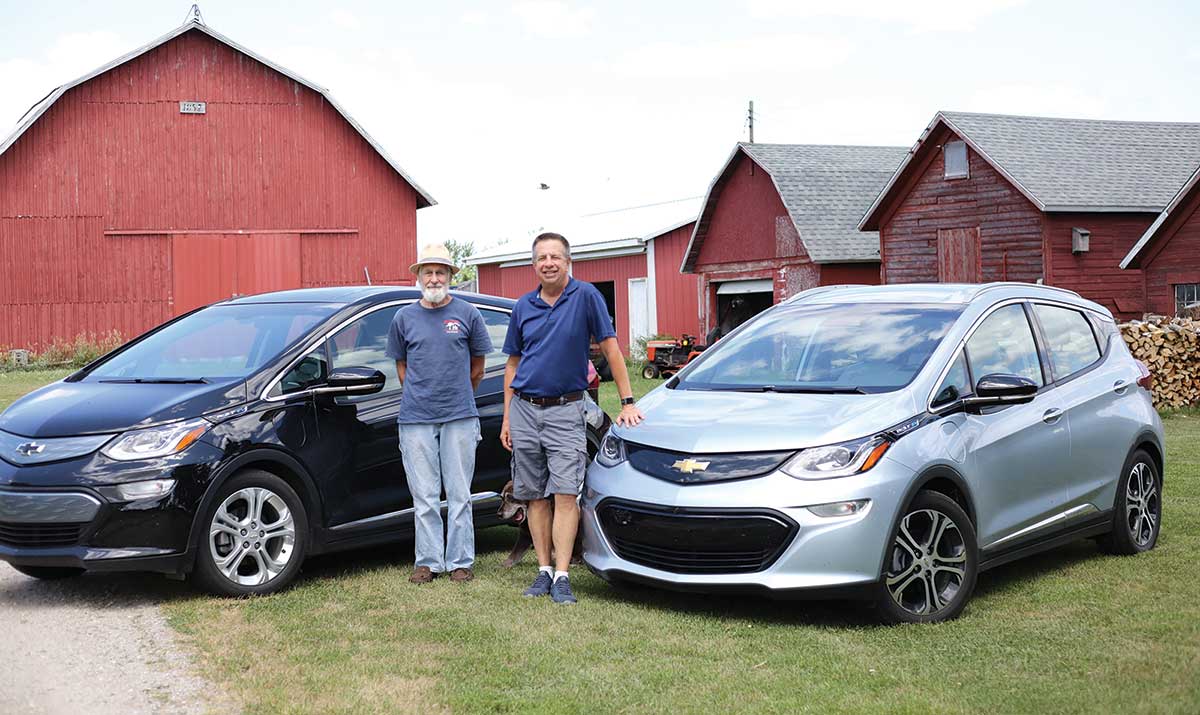 Norm, now 82, lost his beloved wife of 57 years unexpectedly in February, 2018 in an automobile accident. The devastation of such a loss can be insurmountable, but it was perhaps that shared love of taking drives that helped Norm heal.

As in the case of most curative stories, family and friends can be found at the heart of each.

A friend of Norm’s, Roger Bradshaw, purchased a Chevy Bolt in 2018, replacing his previous electric car, a Chevy Volt purchased in 2012. Over the years, Roger and Norm frequently talked about electric vehicles, how they were evolving, and why Roger was hooked.

“Eventually, I thought, ‘I say I care about the environment and want to reduce my carbon footprint,’” said Norm. “If that’s true, I’m either going to quit driving or do something about it.”

Not long after, a plan started piecing together.

Friends in California had missed Donna’s memorial service, and Norm had never felt quite right about that. He began thinking of driving from his home in Fremont, Michigan, to where his friends lived in Southern California, over 2,000 miles away.

While dates and routes were being considered, Roger was a huge help, utilizing his experiences over the years with his electric vehicles and identifying useful resources to find charging stations along the way. Roger and Norm also took a small test run to Brighton, Michigan—about two and a half hours away.

Norm set out on his trip the day after Easter in 2019, with maps, OnStar, and his friend Roger just a phone call away.

Norm navigated the range anxiety (concern of running out of power without a charging station nearby) and even settled into traveling at a slightly slower speed to conserve energy. Having Roger available for quick online checks was another way that Norm felt he had his buddy in the passenger seat supporting him.

Norm found dealerships very helpful and courteous—offering him their lounges and cups of coffee while his Bolt recharged. It wasn’t until a charge at Petrified Forest in the Painted Desert on his way to Flagstaff, Arizona, that Norm ran into his only challenge.

After charging at a Level 2 station, with approximately 50 extra miles available on his charge, Norm experienced the effect of the altitude changes on the way to Flagstaff. Increased incline uses more power, and as Norm pulled into his reserved hotel that evening, he had very little energy left.

The hotel had misinformed Norm about their charging capabilities, sending him elsewhere for a Level 2 station, which ended up being out of service. After a bit of a scavenger hunt, Norm pulled up to a final station and his car ran out of juice. He’d pulled up just far enough to plug in, but the car wouldn’t accept the charge.

One tow truck later and Norm and his Bolt were at a local dealership. The serviceman on duty said they didn’t have a certified Bolt technician, but they decided to plug it into an older Volt charging station and try their luck. At first—nothing. But finally, a green flashing light indicated the car was receiving a charge.

The serviceman offered to drop Norm at his hotel, as the man was heading out on a date with his wife. He then offered to swing by the dealership on his way home to check on the Bolt and give Norm an update. The following day, that same serviceman came in on his day off to meet Norm and make sure his Bolt was charged enough to make it on his next leg of the trip.

“The people you meet along the way, I tell you…” said Norm. “I’ll always remember folks like that guy and Roger who made this trip a success.”

Norm made it to his next stop to meet friends in Phoenix and finally to his destination in California.

“There were a lot of emotions as I arrived in California—having that time to remember Donna and do some thinking and grieving,” said Norm. “There was also a total feeling of success and being so blessed. Being with friends just accentuated it all.”

What Do EV Charging Levels Mean?

Level 2—Home and Public Charging:
Level 2 charging typically requires a charging unit on a 240V circuit, like the circuit used to power a common electric clothes dryer. The charging rate depends on the vehicle’s acceptance rate and the maximum current available. With a typical 30 amp circuit, about 180 miles can be added during an eight-hour charge.

Level 2 chargers are the most common public chargers, and you can find them at places like offices, grocery stores, and parking garages. Public Level 2 chargers have a standard EV connection plug that fits all current vehicles, except for Teslas, which require an adapter.

DC Fast Charging—Public Charging:
DC fast charging is the fastest currently available recharging method. It can typically add 50 to 90 miles in 30 minutes, depending on the station’s power capacity and the make of EV.