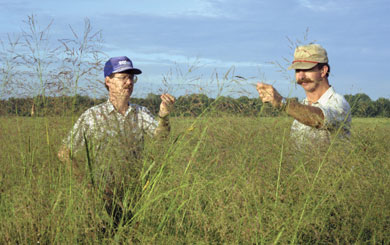 This is fifth in a series on how electricity is generated. The others covered clean-coal technology, nuclear, wind power and natural gas. Watch future issues for stories about other fuel sources.

Biomass” consists of any biological material that can be burned as fuel to produce electricity, and it’s everywhere. A quick drive down a country road provides a virtual tour of this renewable energy resource: trees, grasses, crops, livestock waste, and even landfill gas. Recent advances in technology have made it possible to use tried-and-true biomass in more efficient ways.

Today, the U.S. has over 13,000 megawatts (MW) of biomass generating capacity, making it the third-largest source of renewable energy behind hydropower and wind.

How It Works
The basic premise behind this power source is simple: Burning actual biomass feedstock or methane gases produced by decomposition of organic material—in whatever form—creates steam, which then spins a turbine and generates electricity. Given the wide variety of biomass resources available, questions on what to burn and in what manner can be answered in a number of ways:

The Future of Biomass
Biomass has come a long way from putting a log on a fire. Applications continue to develop, many of which involve converting biomass to other forms to supplement petroleum use.

New sources of electricity and fuel production are researched every day, and soon, waste such as corn stover (stalks, leaves and husks) and wheat straw will be added to the mix. Non-food crops such as trees and grasses are also being researched for their energy-producing potential, especially in liquid form.